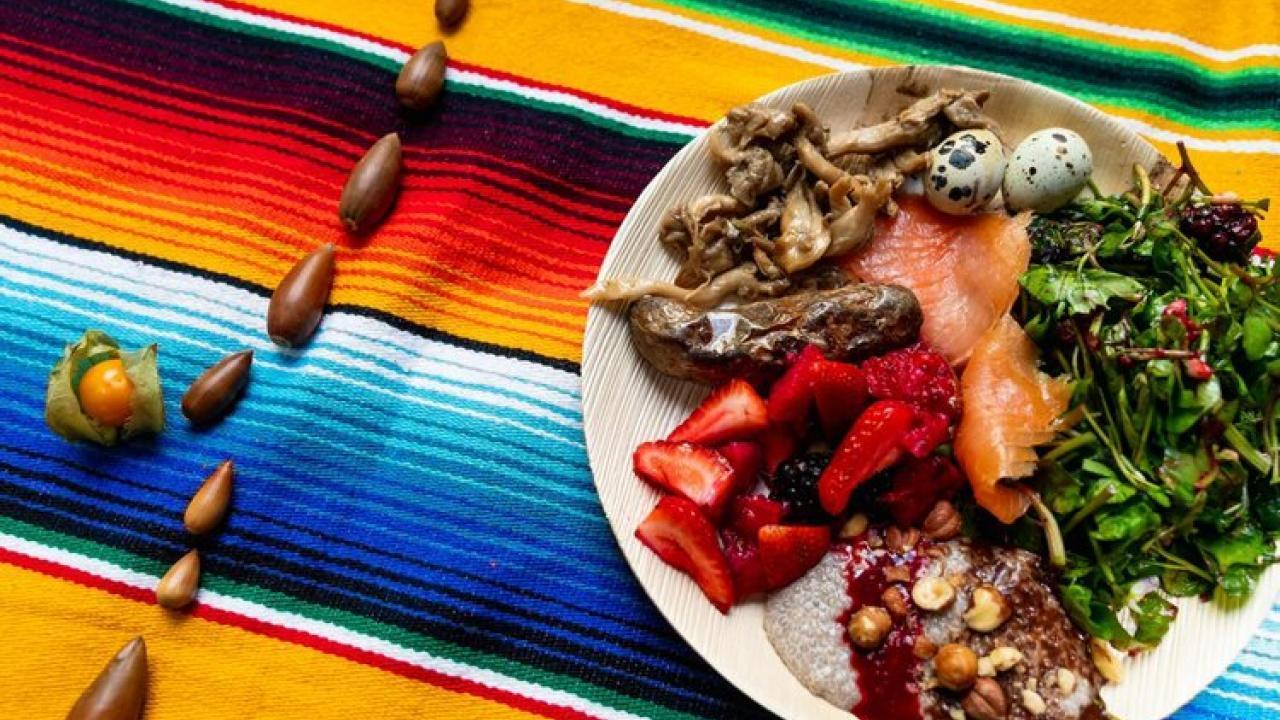 “What happens to our research, teaching, and service activities if we put Indigenous Peoples, places, and practices at its center?” Dr. Jessica Bissett Perea (Dena’ina), Assistant Professor of Native American Studies at UC-Davis, posed this framing question at the beginning of “A Taste of Ohlone,” an April 21 event hosted by the Radical and Relational Approaches to Food Fermentation and Food Sovereignty DHI Transcollege Research Cluster and was featured as a part of the Robert Mondavi Institute for Wine and Food Science’s Sips and Bites series. Cafe Ohlone (mak-‘amham) co-founders Vincent Medina (Chochenyo Ohlone) and Louis Trevino (Rumsen Ohlone) demonstrated what is possible by guiding event participants through a series of 4 tastings of Ohlone foods and ingredients. What happens to our understanding of what is now known as the San Francisco Bay Area if we put Ohlone histories, languages, and flavors at its center?

In advance of the event, participants received a tasting box of 4 different foods on mak-‘amham’s menu. mak-‘amham “means our food in Chochenyo language,” Medina explained, “the Indigenous language of eastern San Francisco Bay.” Medina and Trevino opened Cafe Ohlone in Berkeley, CA in 2017 because they were inspired by past generations’ successes in the revitalization of Ohlone language, storytelling, and land stewardship practices. They wanted to contribute to these ongoing processes of healing through the power of Ohlone foods and flavors.

Before diving into the evening’s tastings, Medina and Trevino situated the Ohlone ingredients and foods they were about to share into a broader history of Ohlone Peoples and into the web of community relationships and practices that they and their families participate in. Many of mak-‘amham’s foods, they explained, are connected to enduring traditions of Ohlone land stewardship, including periodic cultural burns and fire ecology that are important to managing the East Bay’s interconnected food systems on which all life depends. Medina and Trevino said that the abundance from which they gather their ingredients must be responsibly managed and emphasized that these Ohlone practices were not only important to the experience of Ohlone foods but also to the future of our present food systems. “Our culture,” Medina explained, “it should not just be relegated to something in the past but should be looked at as something in the present and something that is going to be increasingly important to the public in the future.”

The evening’s first tasting featured a kimchi using fermented maarah, the Chochenyo word for claytonia, otherwise known as “miners lettuce.” But Medina and Trevino ask that this California Native plant be referred to as “Indian lettuce” or by its native name if shared by regional Native Peoples because of the harm that miners and early settlers caused California Indian Peoples. Medina and Trevino also note that Indigenous People cultivated and used claytonia for thousands of years before miners arrived in California. The kimchi also included fermented coyote flowers, nasturtium, and scallion.

The process of creating this dish, Medina explained, involved collaborating with Sister House Korean Cuisine, a Korean restaurant in Hayward, CA, because they wanted permission to use traditional Korean methods. “We wanted to make sure that we were doing this in a respectful way, so we approached them and asked them if we could implement our greens into their dish, and they were happy to do it,” Medina said. The inclusion of community neighbors from whose culinary traditions Cafe Ohlone draws inspiration cultivates an ethos of respect and reciprocity and is an important part of Ohlone foodways. This practice of collaboration and obtaining permission also models how to avoid harmful cultural appropriation of food traditions not our own.

For the second tasting, participants tried tawwa ‘at mamakwa, a tea made from stinging nettle, rosehip, and rose petal. Medina and Trevino explained that the recipe for this tea comes from community Elders. When Medina and Trevino were devising the menu for Cafe Ohlone, an Elder insisted that they always serve food with this rosehip tea. Medina and Trevino’s combination of storytelling and tasting demonstrate that all the foods tasted during the event, including the tea, are not simply items for consumption. They are deeply interconnected to and embedded in the communities from which they emerge.

This emphasis on the interconnectedness of food and community was especially true for the event’s third tasting of rawwni, the Chochenyo pronunciation of brownie. This rawwni is made of chia seed and hazelnut flour, Zapotec chocolate, and duck egg, which acts as a binder. It is also sprinkled with salt gathered from local East Bay marshes. This recipe emerged from an Ohlone storytelling campout with family and community members and was designed by Trevino to make traditional foods like acorn soup and bread more gratifying to young people at the campout. The original idea was to phase out the brownies once young people grew more accustomed to the acorn flour, but community Elders loved the brownie so much that they requested that it remain on the menu. “We always say this is a really wonderful organic example of not having to choose contemporary or traditional, that these things can co-exist and have value,” Trevino said.

The last tasting was šetnen, black oak acorn bread, the most traditional Ohlone food on offer that evening. Medina and Trevino explained that this bread takes 6 months to prepare: first acorns are gathered then cured for 6 months before being made into a flour and baked. The flavor of this acorn bread has remained unchanged for thousands of years. “This taste,” Medina said. “It’s the exact same taste that our people have been eating for thousands and thousands of years, so as you’re tasting this acorn bread, you’re tasting a memory that’s locked in time with flavor. You’re eating something that is the same exact flavor that’s been carried on through all these generations and will be in the future too.”

Because of the ongoing COVID-19 pandemic, Cafe Ohlone had to close its physical location in Berkeley, but Medina and Trevino have plans to re-open a full-service restaurant and community space for Ohlone People once it is safe. In the meantime, Cafe Ohlone is providing once-a-month meal boxes called Sunday Supper, a 9-10 course meal that intertwines food with Ohlone community expressions, featuring video messages from Elders interpreting foods, a playlist of songs, and natural elements from Ohlone landscapes.

For more information about Cafe Ohlone visit https://www.makamham.com/ and follow them @makamham on Instagram. To view a recording of this Sips and Bites event, visit https://youtu.be/g66VifpUdwM.