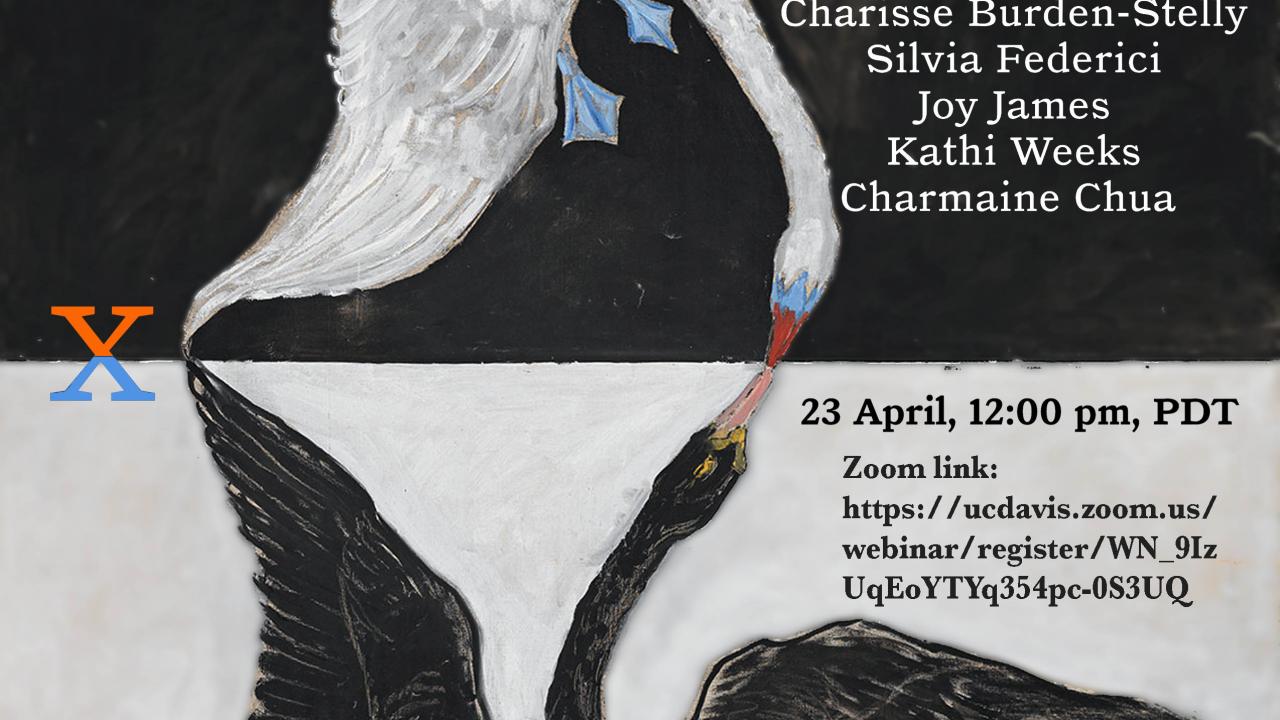 The “abolition x communism” event, sponsored by The Mellon Sawyer Seminar in Contemporary Political Struggle and The Davis Humanities Institute, brought together some of the most influential scholars in revolutionary theory and praxis to discuss abolition and communism not as official upper-case ideologies but as lower-case ideas about how to organize social existence.

Joshua Clover, a professor in the UC Davis English Department, introduced the event by explaining that the “x” between “abolition” and “communism” in the event’s title was designed to help us think differently about the relationship between these two concepts and practices, to think about the “crossover” between abolition and communism. He pointed out the relevance of these kinds of conversations in the aftermath of the insurrection at the US Capitol on January 6th, where white supremacists were rioting because the police and the state were not as repressive and violent as they desired--yet they claimed they were fighting against the specter of communism.

The event’s moderator, Dr. Charmaine Chua (UCSB, Global Studies), introduced the format of the event and spoke briefly of the histories of agreements and disagreements between abolition and communism.

Dr. Charisse Burden-Stelly (Carleton College, Africana Studies and Political Science) began her remarks by pointing out the lack of distinction between political dissidence and criminality in the US. She argued that communism and abolition need to be thought together because the red scare and the black scare have an intertwined history. She spoke of Mumia Abu-Jamal, Benjamin J Davis Jr, and Angelo Herndon, who were incarcerated because they were Black revolutionaries with communist political views. Burden-Stelly pointed out that the tactics and laws used against the communists were also used against Black Panthers. Citing the Smith and McCarran Acts, she also revealed how the carceral and anti-communist state produces people whose livelihoods are predicated on destroying communities, being suspicious of and violent towards the people, and telling lies in order to throw people in prison for believing in the wrong ideas. Ending with the statement that to be Black is to be criminal, Burden-Stelly called for Blackness to be at the center of our interrogations of communism and abolition.

Dr. Silvia Federici, (Hofstra University, professor emerita), defined communism as a society that is not built on exploitation, that affords equal access to the wealth produced, that is  based on cooperation, not competition, and that is self-governed. Communism should not be envisaged as a state model because states are organs of social repression. But if this is what communism is, Federici continued,  then abolition is absolutely necessary and simultaneous. Furthermore, she argued, it’s not enough for us to fight against anti-communism and the carceral state; we must create alternative forms of government and power that take on the functions of justice, protection, and care that the carceral police state claims to have but does not actually provide.

Centering her work on the prison abolition of Angela Davis and the communist writings of US Marxist feminists, Dr. Kathi Weeks presented on the methodological synergies between these two groups. Weeks, a professor of Women’s Studies at Duke, argued that abolition has a method that can and should be applied to other areas of struggle. She identified two key components of its method: 1) structuralism, which she defined as an aspiration of systems thinking, questioning how systems work to cause harm or help; and 2) utopianism, which she defined not as fantastical thinking but as the necessity to imagine better futures that are not just more tolerable versions of the present.

Dr. Joy James, professor of Africana Studies at Williams College, began her remarks by reading the poem “New Bones” by Lucille Clifton. She spoke of the importance of seeking new bones and new structures in our revolutionary struggles. James also encouraged the audience to be aware of the ways in which academia and universities are not amenable to revolutionary struggles and the growing of new bones. Academic sectors often fail to recognize the intellectualism and abolitionary praxis of the working class. She also argued that academic abolitionism is often hampered by its desire to speak for people rather than with them, and by its ties to capital: “if capital is financing our freedom movements, then they are not freedom movements.” James ended with a discussion about who controls the terms of discourse in revolutionary struggles, contending that we can only get new bones if we return to the power and intellectualism of “the people who die first and die poor.”

A recording of the event can be viewed here.