Video Games Have Always Been Queer, a talk by Bonnie Ruberg 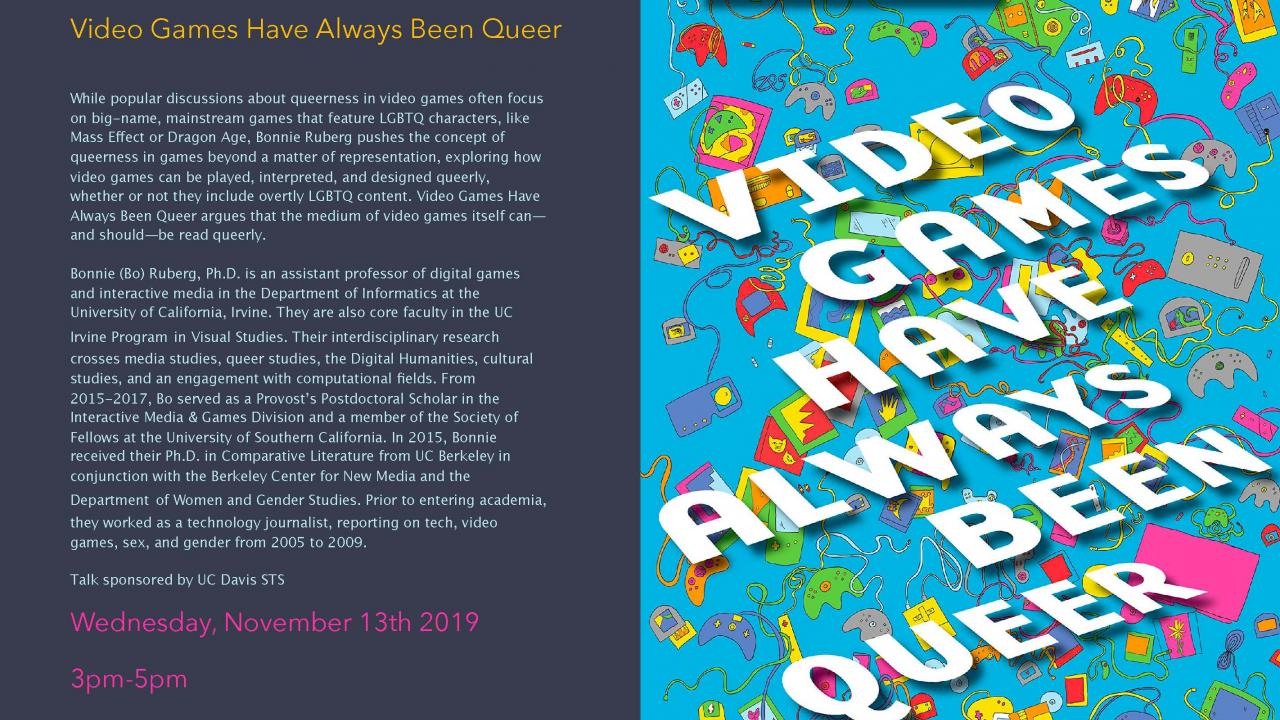 While popular discussions about queerness in video games often focus on big-name, mainstream games that feature LGBTQ characters, like Mass Effect or Dragon Age, Bonnie Ruberg pushes the concept of queerness in games beyond a matter of representation, exploring how video games can be played, interpreted, and designed queerly, whether or not they include overtly LGBTQ content. Video Games Have Always Been Queer argues that the medium of video games itself can—and should—be read queerly.

In the first book dedicated to bridging game studies and queer theory, Ruberg resists the common, reductive narrative that games are only now becoming more diverse. Revealing what reading D. A. Miller can bring to the popular 2007 video game Portal, or what Eve Sedgwick offers Pong, Ruberg models the ways game worlds offer players the opportunity to explore queer experience, affect, and desire. As players attempt to 'pass' in Octodad or explore the pleasure of failure in Burnout: Revenge, Ruberg asserts that, even within a dominant gaming culture that has proved to be openly hostile to those perceived as different, queer people have always belonged in video games—because video games have, in fact, always been queer. - NYU Press

Bonnie (Bo) Ruberg, Ph.D. is an assistant professor of digital games and interactive media in the Department of Informatics at the University of California, Irvine. They are also core faculty in the UC Irvine Program in Visual Studies. Their interdisciplinary research crosses media studies, queer studies, the Digital Humanities, cultural studies, and an engagement with computational fields. From 2015-2017, Bo served as a Provost’s Postdoctoral Scholar in the Interactive Media & Games Division and a member of the Society of Fellows at the University of Southern California. In 2015, Bonnie received their Ph.D. in Comparative Literature from UC Berkeley in conjunction with the Berkeley Center for New Media and the Department of Women and Gender Studies. Prior to entering academia, they worked as a technology journalist, reporting on tech, video games, sex, and gender from 2005 to 2009.

Bo’s research explores sexuality and gender in digital media and digital cultures, with a focus on LGBTQ issues and video games. They are the author of Video Games Have Always Been Queer (NYU Press, 2019), the co-editor of Queer Game Studies (University of Minnesota Press, 2017), and the co-founder and co-organizer of the annual Queerness and Games Conference. Their next book, The Queer Games Avant-Garde, a collection of interviews with queer indie game-makers, will be published by Duke University Press in spring 2020. They have also published a wide variety of articles on topics such as queer digital humanities, sexual labor in digital spaces, the straight-washing of queer video games, and the queer potential of “bad” affect in video game play.