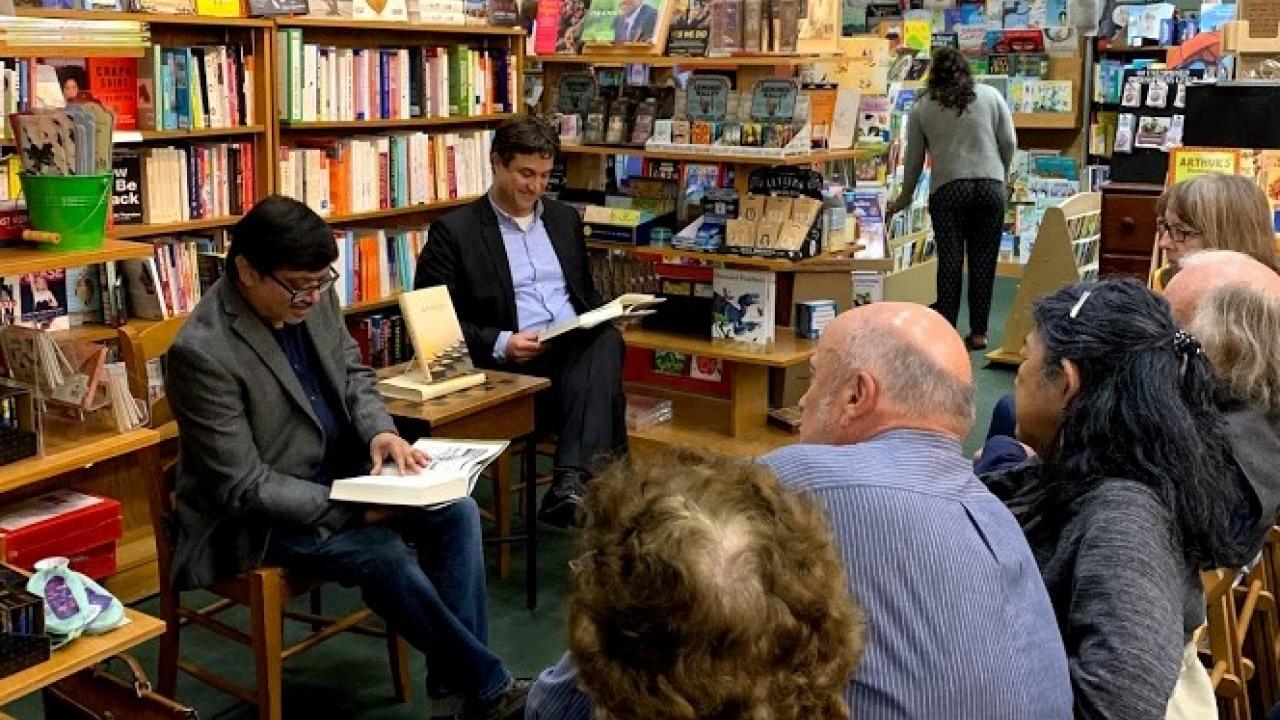 In his sweeping and powerful new book, Ganges: The Many Pasts of an Indian River, Sudipta Sen, Professor of History at UC Davis, asks how one river can simultaneously be a sacred bearer of meaning and, in some places, one of the most polluted in the world. “If the Ganges River is considered sacred by Hindus across India and worshipped every day as purifier, goddess, and mother, why do the people allow it to become polluted by the wastes of cities, industries, and households?” Sen writes.

The Ganges is capable of holding this contradiction along with many more layers of meaning, Sen said at his November 15 Book Chat. The event, which filled the Avid Reader in downtown Davis, was the first in the Davis Humanities Institute’s 2019-2020 Book Chats series. Book Chats create opportunities for UC Davis faculty to share exciting new work with the Davis community. 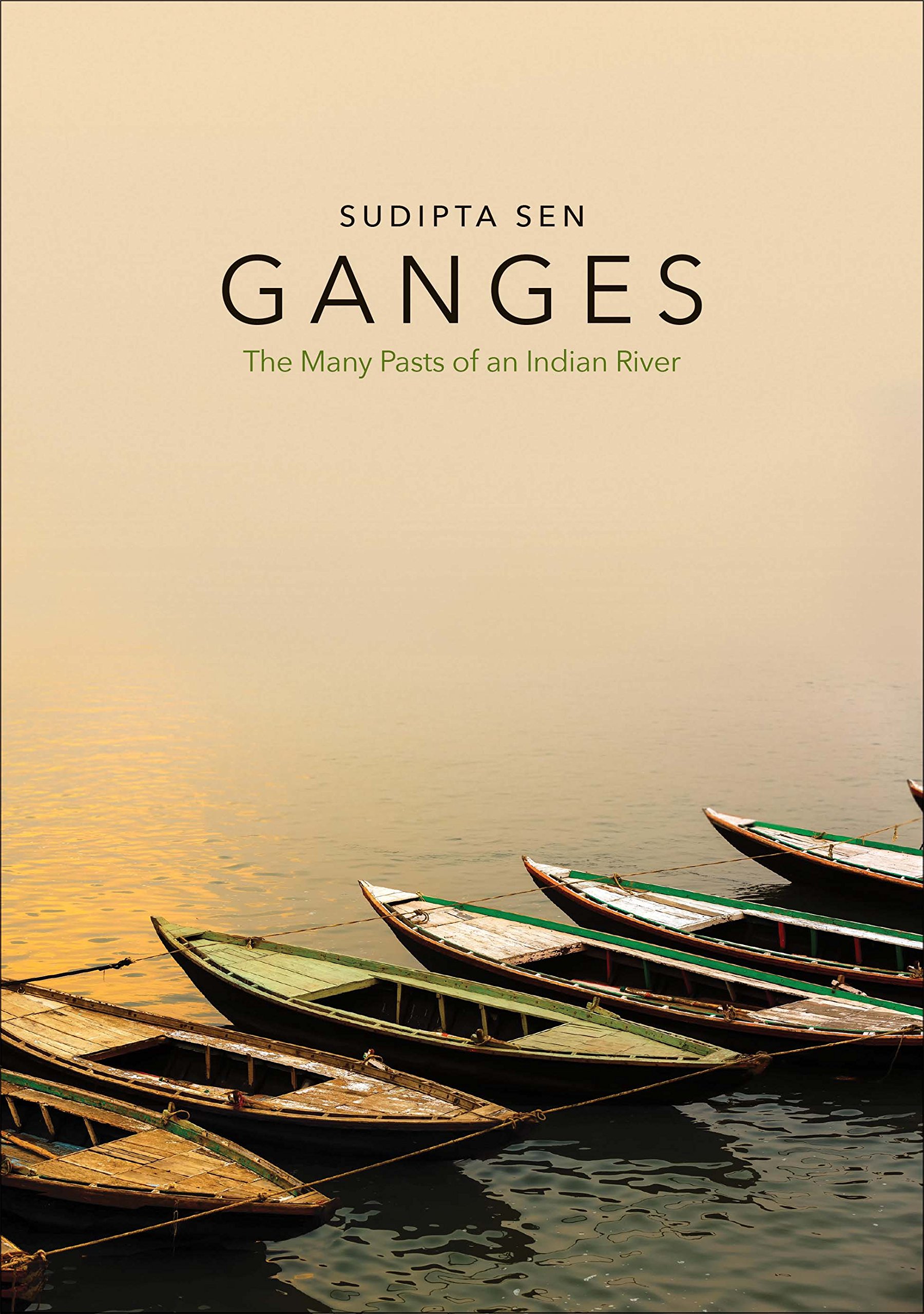 Sen’s history of the world’s third-largest river draws on myth, religion, art, science, politics, and personal experience to tell the story of the Ganges from prehistory to modernity. Sen’s own travels along the river inform Ganges, which is the culmination of 12 years of work and is being celebrated by reviewers as the most important history of the Ganges to date.

At the Book Chat, Sen read an excerpt from the book’s introduction describing how for centuries the river has been central to Hindu rituals related to death and the afterlife: “The sanctity of Ganges water in the mind of the dying solider facing death in battle and the ritual funeral of a sannyasi are affective examples of ancient life-cycle rituals that have defied the passage of time and history, where the river, fashioned from the primordial bodies of earth and water, survives as a visible reminder of human transience.”

In Ganges, such explorations of the river’s enduring spiritual and historical significance are woven together with analysis of humans’ ecological impact on the river valley. In response to an audience question, Sen said that living in the Central Valley near the Sacramento-San Joaquin River Delta informed his thinking, particularly about the effect of climate change. Concerns about the receding snowpack in the Sierras parallel the similarly impacted Himalayas, where the Ganges begins.

Thinking with rivers, Sen said, provides an entry point for addressing the unfathomable. “In the 1990s China’s Yellow River, the Huang He, just stopped, hundreds of miles from its source,” Sen said. “To think that something like that could happen to the Ganges is almost beyond comprehension, but it’s also possible.”

DHI Director Jaimey Fisher said the event was a successful kickoff to this year’s Book Chat series. “We were delighted to have our first DHI Book Chat at the Avid Reader and delighted at the great turnout for Sudipta Sen’s book Ganges. It was the biggest turnout we’ve had in the last few years, which highlights how much community interest there is in our faculty’s research. We were especially pleased because the DHI had helped support Prof. Sen’s research with our fellowships. We look forward to working with the Avid Reader more in the future.”

The next DHI Book Chat will take place on January 15, 2020 at 6pm at the International House, and feature Eric Louis Russell, Associate Professor in the Department of French and Italian. Russell’s book, The Discursive Ecology of Homophobia: Unraveling Anti-LGBTQ Speech on the European Far Right, is a study of the power of language that focuses on the overt and covert homophobic discourses of populist Far Right groups in France, Italy, and Belgian Flanders.

On April 28, 2020, the Book Chat series will conclude at the Mary L. Stephens Library with Lorena Oropeza, Associate Professor in the Department of History. Oropeza’s book, The King of Adobe: Reies López Tijerina, Lost Prophet of the Chicano Movement, is a biography of Reis López Tijerina, the militant civil rights-era activist who led the 1960s movement in New Mexico to regain land lost following the U.S.-Mexico War.

Do the Next Right Thing: Career Development Resources for Humanities Grads

Congratulations to Scholars Selected for NHC's Podcasting the Humanities