Overtly homophobic speech is condemned in many areas of Western culture today, and yet homophobia persists. How might a linguist, someone who “dissects language,” understand how homophobia “subsists in the shadows under a veneer of politeness?”

Eric Louis Russell, Associate Professor in the Department of French and Italian at UC Davis, asks this question in his new book, The Discursive Ecology of Homophobia: Unraveling Anti-LGBTQ Speech on the European Far Right. Russell read from and discussed his book on January 15 at International House Davis, in this year’s second DHI Book Chats event.

Russell’s book uses case studies from France, Italy, and Belgian Flanders to analyze how homophobic speech is mobilized in contemporary European culture and politics. In each case, Russell argues, homophobia is furthered through speech that denies being exclusionary. At the event Russell suggested that the language mobilized by these far-right groups might seem recognizable to anyone paying attention to the speech acts of Donald Trump.

Russell explained that the method of discursive ecology allows him to attend to all that constitutes language beyond words themselves. When we consider how words function as part of a larger system of communication, we can more effectively respond to hate speech that at first seems hidden, or that is denied outright by the speaker. 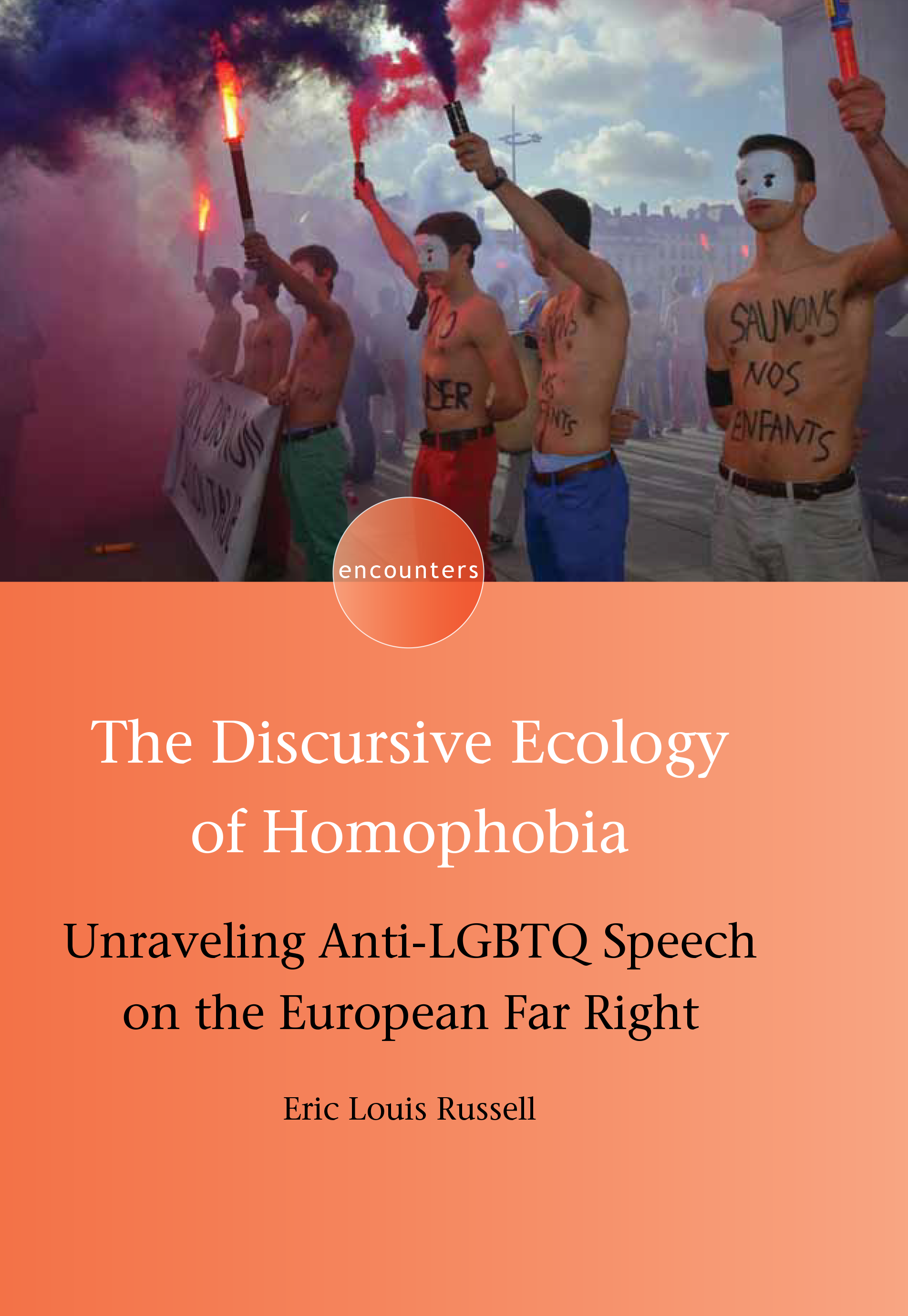 Social media allowed Russell to track the linguistic and visual communications of Les Hommen, the French anti-gay protest group featured on the book’s cover. Les Hommen express their objections to the legalization of gay marriage and gay adoption through shirtless, masked demonstrations for which they paint slogans on their chests. The group’s members, Russell argues in his book, “establish themselves as the masculine savior of children” in reaction to “a social order that would undermine the hegemonic position of the French male.”

Russell’s Italian case study is le Sentinelle in Piedi, or “Watchmen Standing,” a group who stage silent vigils in Italian town squares. Members stand individually, some distance apart, and silently read while spokespeople distribute leaflets claiming infringement on democratic civil liberties. Russell’s analysis reveals how beneath a “supposedly moderate” stance and a “veneer of civility,” the group’s communications argue for an essentialist male-female binary that “obviates LGBTQ claims to equality, visibility, and inclusion.”

Belgium’s Filip Dewinter, a populist politician whom Russell called “the Flemish Donald Trump,” provides the material for a third case study. Dewinter’s popularity rests on the promotion of ideas about the “authentic” European and the “authentic” Fleming. Russell’s book shows that Dewinter’s speech coopts the LGBTQ citizen to promote the exclusion of Muslims and immigrants. For instance, Dewinter’s claim that although he embraces LGBTQ citizens, Muslim immigrants do not, is, according to Russell, a mode of “toxic pinkwashing.”

The practice of what he calls "discursive ecology" allows Russell to see how Dewinter’s claims that he supports LGBTQ citizens are belied by the fact that he invokes them to promote hate and exclusion of immigrants. Similarly, while the Sentinelle claim to be nonpartisan and not affiliated with the Catholic church, in fact they are extremely partisan and church-affiliated. And the Hommen’s attempt to position themselves as benevolent protectors of children barely conceals their reactionary stance against LGBTQ citizens and families.

One attendee wondered how Russell’s findings might help us fight homophobia when we encounter it. What might a discursive ecology of anti-homophobia look like? Russell responded that a deeper understanding of how speech can function to conceal hateful attitudes is a tool to use in conversation with those who perpetuate homophobia. Ultimately, Russell’s book reveals the power of language, both to promote hate and to fight it.

Resources for resisting hate and homophobia in our community:

The next DHI Book Chat featuring Lorena Oropeza on her book, The King of Adobe: Reies López Tijerina, Lost Prophet of the Chicano Movement, will take place April 28 at the Mary L. Stephens Library in Davis.

Zombies: What’s Freud Got to Do With It?