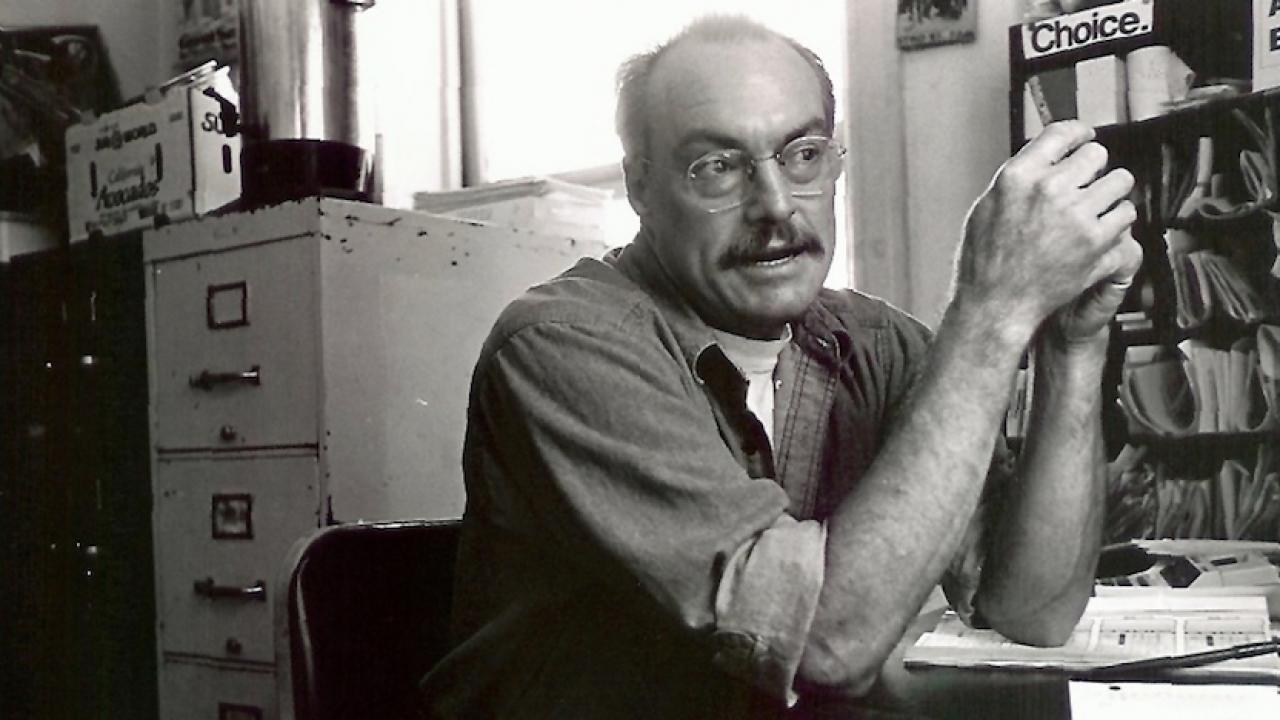 A new documentary by UC Davis professor Bob Ostertag tells the little-known story of gay activist Hank Wilson, whose devotion to serving the most marginalized, and whose seemingly limitless energy for organizing led some in his community to declare him a saint. Thanks to Hank had its local premiere on Wednesday at the Pitzer auditorium, followed by a Q&A with the filmmaker.

Ostertag, an acclaimed composer, performer, activist, and writer who was Wilson’s intimate friend, has said that he always knew he wanted to tell Wilson’s story. Although he had never made a movie before, Ostertag said, “I wanted Hank to be present in the collective queer memory, and film was the most effective medium for accomplishing that.”

In the 1970s and 80s Wilson founded over 20 organizations to support and uplift San Francisco’s gay community. At the height of the AIDS crisis he turned the Ambassador Hotel, a single room occupancy building in San Francisco’s Tenderloin district, into a hospice for people with AIDS who had nowhere else to go.

The film tells Wilson’s story with archival footage, interviews, and animation by Jeremy Rourke. At the post-screening Q&A Ostertag explained that he initially decided to use animation because he was concerned that he wouldn’t find much archival footage of Wilson, who eschewed the spotlight. In the end, the filmmaking team found more footage than expected, but the animation stayed.

Rourke created the animation by hand, printing out photographs and manipulating them on a green-painted table that served as a low-budget greenscreen. “All of the still photos in the film were touched by human hands,” Ostertag explained. The choice was fitting for a film about a DIY activist committed to an ethic of care.

Wilson, who grew up in Sacramento, moved to San Francisco in the early 1970s. Soon after, he founded the Gay Teachers Coalition, leading organizing efforts to secure employment protections for gay teachers in San Francisco.

Many of the organizations Wilson founded persist today in some form, including San Francisco Gay Democratic Club, Tenderloin AIDS Network, Mobilization Against AIDS, ACT UP Golden Gate, AIDS Candlelight March, and Lavender Youth Recreation and Information Center. Those who knew him say that he was humble and unassuming about this work and never sought personal recognition.

One of the film’s surprising moments occurs during an interview with Lea Delaria, a comedian and actor now famous for her role in Orange is the New Black, who frequently performed at the legendary gay cabaret the Valencia Rose, which Wilson co-founded. From off-camera, Ostertag mentions Wilson’s work with people with AIDS at the Ambassador. Delaria is shocked: Hank never told her about it.

Thanks to Hank was made on a tiny budget, which, Ostertag noted, is how he believes Wilson would have wanted it. “The running joke was that Hank wouldn’t have wanted this movie to be made about him. He was not interested in praise or being the center of attention, and he wouldn’t have wanted a lot of money spent on the movie.”

In that spirit, Ostertag crowdsourced the funding and much of the footage. Photographers who had known Hank donated photos of him, and musicians donated the score. Ostertag believes that these people were inspired by Wilson’s legacy and his story to be generous with what they could offer to help the movie be made.

Wilson, who had AIDS, was eventually diagnosed with lung cancer. Near the film’s end, Ostertag tells the story of buying his friend a bed to die in, because until weeks before his death he slept on a pallet on the floor. What’s more, ironically—and tragically—for someone who worked so hard to care for people dying of AIDS, Wilson’s own hospice nurse was too afraid of the disease to provide him with good care. He died in the hospital in 2008.

Ostertag’s film premiered last year at Frameline, the San Francisco International LGBTQ+ Film Festival, which Wilson helped found and which is now the oldest and largest LGBTQ+ film festival in the world. When it premiered there, Thanks to Hank was met with a packed theater and standing ovations.