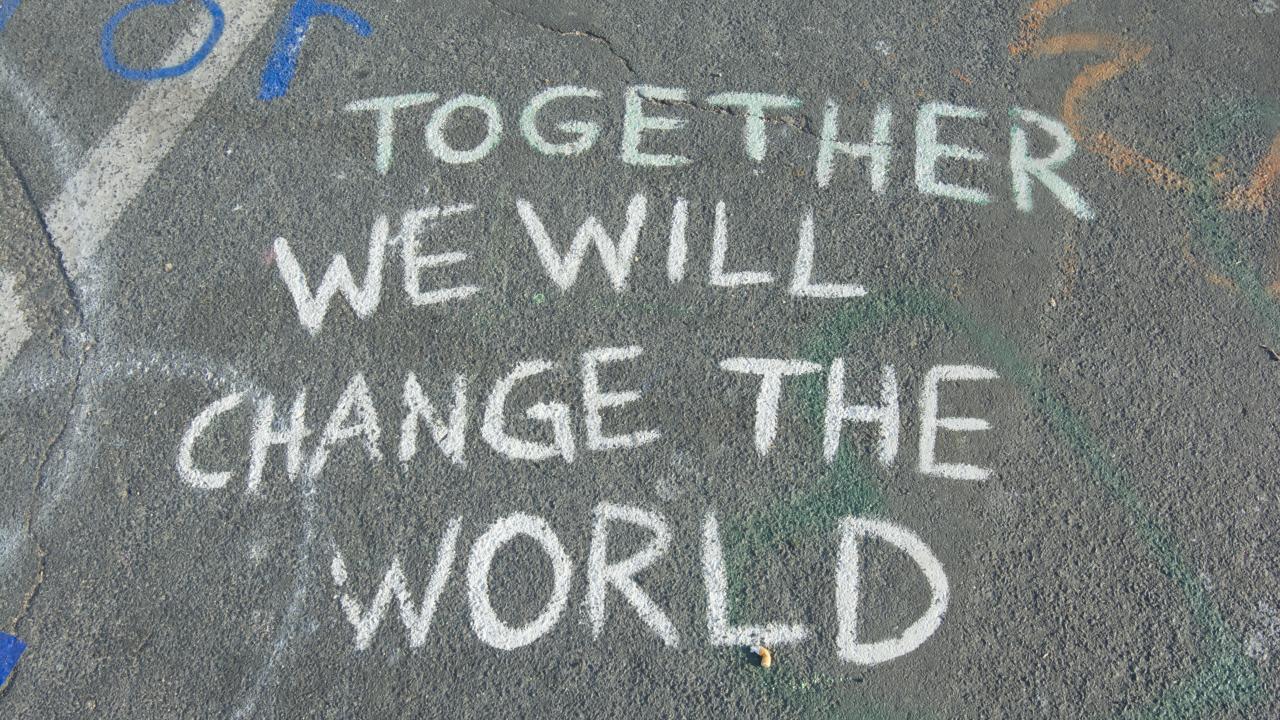 Abolition, as a movement and a struggle, encompasses a broad range of organizing for a society without imprisonment or policing. For Ruth Wilson Gilmore, author of Golden Gulag: Prisons, Surplus, Crisis, and Opposition in Globalizing California, “it’s both a long-term goal and a practical policy program, calling for government investment in jobs, education, housing, health care — all the elements that are required for a productive and violence-free life.” Derecka Purnell writes, “Rather than thinking of abolition as just getting rid of police, I think about it as an invitation to create and support lots of different answers to the problem of harm in society, and, most exciting, as an opportunity to reduce and eliminate harm in the first place.” Below, please find a small sampling of resources on abolition in a list that is not at all exhaustive but rather intended as a point of departure.

Recordings from this fall’s speakers, including Angela Y. Davis and Robin D.G. Kelly, in the Visualizing Abolition series at UC Santa Cruz are online.

In On The Road With Abolition, Dean Spade, Woods Ervin & Kamau Walton from Critical Resistance, K Agbebiyi from Survived and Punished NY, and Mariame Kaba from Project NIA and Survived & Punished discuss proposals for abolitionist organizing.

The Davis Humanities Institute’s events The Minneapolis Uprising: Abolition and the Struggle for a Police-free City and 400 Years of Resistance: Race, Policing, and Abolition are up on our YouTube channel.

Abolition: A Journal of Insurgent Politics focuses on “research, publishing, and study that encourage us to make the impossible possible, to seek transformation well beyond policy changes and toward revolutionary abolitionism.”

In The Belly: An Abolitionist Journal’s “project is to strengthen the bonds between all of us to overcome the state’s regime of isolation, to study and learn together, and to build a world without prisons.”

“[T]he way that we understand disability within disability justice, disability studies, is that disability is really the interaction between people and their environment."
-Rust Belt Radio episode 13, “Carceral Ableism and Disability Justice.”

“To McAlevey, organizing, at its core, is about something very simple, and very close to the heart of this show: how do you talk to people who may not agree with you such that you can truly hear them, and they can truly hear you?”
-A master class in organizing

Free Black Dirt is “an experimental arts collective of dopeness” based in Minneapolis, Minnesota.

Sins Invalid “is a disability justice based performance project that incubates and celebrates artists with disabilities, centralizing artists of color and LGBTQ / gender-variant artists as communities who have been historically marginalized.” They even have a coloring book!

“After decades of market liberalization, debt—and specifically mortgage debt—had become a complex and increasingly valuable financial product. Black and brown people thus entered the market not as home owners but as consumers of debt as commodity. They were cut off not only from the possibility of acquiring any real value or accumulation of wealth but also from the full personhood and freedom held out to them by the promise of home ownership.

As a result of that double exclusion, the only kind of 'secure housing' they would be offered would be found on the other side of what I call the dark mirror of democratic security, in the hundreds of thousands of housing units where predominately black and brown men, women, and children are contained as security threats: in prison cells.”
-Ofelia Ortiz Cuevas, Assistant Professor of Chicana/o Studies, UC Davis, “Welcome to my Cell: Housing and Race in the Mirror of American Democracy”

“Like mid-Atlantic revolutionaries, white settlers in California and Southern slave owners, journalists fashioned narratives about lynching as a form of popular sovereignty that made the violence seem acceptable, necessary and just.”
-Erin Gray, Assistant Professor of English, UC Davis, “Anti-Lynching Laws Were Never Meant to Defend Black Lives: The Case of Jasmine Abdullah”

Of Jasmine Gibson’s Don’t Let Them See Me Like This, publisher Nightboat writes, “Speaking to those who feel disillusioned by both radical and banal spaces and inspired/informed by moments of political crisis: Hurricane Katrina, The Jena Six, the extrajudicial executions of Black people, and the periods of insurgency that erupted in response, this book acts as a synthesis of political life and poetic form.”

“When people, especially white people, consider a world without the police, they envision a society as violent as our current one, merely without law enforcement — and they shudder. As a society, we have been so indoctrinated with the idea that we solve problems by policing and caging people that many cannot imagine anything other than prisons and the police as solutions to violence and harm.

People like me who want to abolish prisons and police, however, have a vision of a different society, built on cooperation instead of individualism, on mutual aid instead of self-preservation. What would the country look like if it had billions of extra dollars to spend on housing, food and education for all? This change in society wouldn’t happen immediately, but the protests show that many people are ready to embrace a different vision of safety and justice.”
-Mariame Kaba, “Yes, We Mean Literally Abolish the Police”

Leah Penniman’s Farming While Black “offer[s] the first comprehensive manual for African-heritage people ready to reclaim their rightful place of dignified agency in the food system. This one-of-a-kind guide provides readers with a concise 'how-to' for all aspects of small-scale farming.”

“What if Derek Chauvin had kneeled on George Floyd’s neck for seven minutes and 46 seconds instead of eight? Maybe Floyd would have lived to be arrested, prosecuted, and imprisoned for allegedly attempting to use a counterfeit $20 bill. Is that justice? This, for me, is why we need police abolition.”
-Derecka Purnell, “How I Became a Police Abolitionist”

The essays in Jackie Wang’s Carceral Capitalism “illustrate various aspects of the carceral continuum, including the biopolitics of juvenile delinquency, predatory policing, the political economy of fees and fines, cybernetic governance, and algorithmic policing. Included in this volume is Wang's influential critique of liberal anti-racist politics, 'Against Innocence,' as well as essays on RoboCop, techno-policing, and the aesthetic problem of making invisible forms of power legible.”

“Because conditions in the urban South were dramatically freer than on the plantations, the state had to step in to do the job of repression that the slavemasters had usually taken care of themselves.”
-David Whitehouse, “Origins of the Police”

Critical Resistance “seeks to build an international movement to end the Prison Industrial Complex by challenging the belief that caging and controlling people makes us safe.” The organization has chapters in Los Angeles, New York City, Oakland, and Portland; puts out The Abolitionist Newspaper; and maintains a variety of resources.

INCITE! “is a network of radical feminists of color organizing to end state violence and violence in our homes and communities.” The network has published anthologies, maintains a blog, and offers organizing resources on topics ranging from anti-militarism to gender violence and race.

Adam Blescoe’s Minneapolis Uprising Syllabus “is intended to offer background to how Minneapolis became a flashpoint for a global uprising against anti-Blackness and state violence. What follows is meant to be a brief introduction to understanding the struggles of the Twin Cities’ Black community, focusing especially on the case of Minneapolis.”

The Duke Carceral Studies Network’s website includes resources in various media on the themes of movements, prison and society, prison experience, policing and law, prison and identity, and theory.

In addition to recommended readings, “It’s not enough to say Black Lives Matter — libraries must divest from the police” offers questions and approaches for libraries to consider.