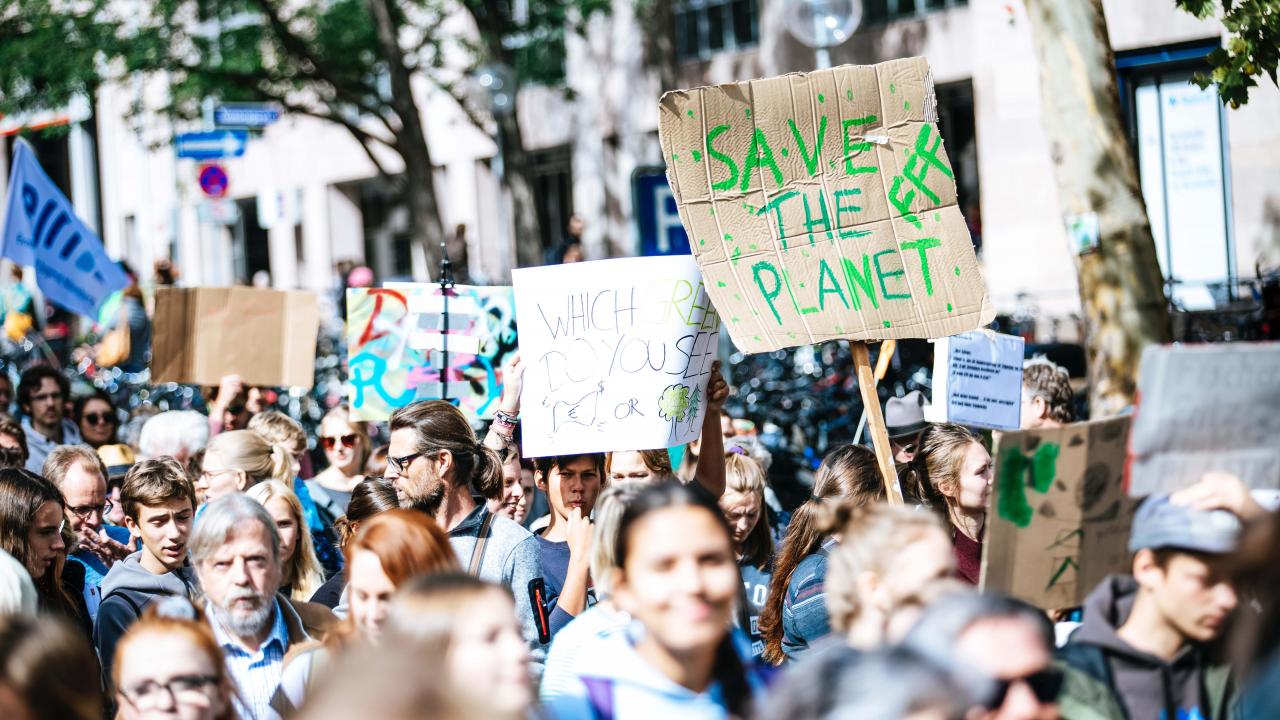 “If we don’t get control of the politics of our state, the country, and the world, we won’t make it,” Frank Pinto told attendees gathered at Davis Odd Fellows Hall for last week’s off-campus Conversation event, “Green New Deal: Policy and Climate Change.” Pinto is a founding member of University Professional and Technical Employees, the only national union to officially support a Green New Deal. His calls for collective action were part of an impassioned conversation Wednesday evening about whether the proposed legislation, and policy in general, can successfully combat climate change.

Associate Professor of English Michael Ziser headed up the DHI-sponsored event, where he was joined by Pinto along with Colin Murphy, Deputy Director of the Policy Institute for Energy, Environment, and Economy. Ziser began the evening with an overview of the Green New Deal’s progressive goals aimed at reducing emissions and promoting equity and justice.

Spearheaded in Congress by Representative Alexandria Ocasio-Cortez, the proposal resolves to address carbon emissions as quickly and comprehensively as possible through a “fair and just transition for all communities and workers.” Its goals include creating high-wage jobs, investing in infrastructure, securing clean air and water for all communities, and ending oppression.

The resolution itself is relatively brief and general, which Ziser, who leads the new Transcollege Research Cluster Green New Deal and Just Transition, argued is “a smart way to go” since it is “important not to foreclose any potential participants too early by specifying.” He emphasized that the Green New Deal suggests there are multiple paths forward for securing a livable future for the planet. Ziser also pointed out that polling suggests the Green New Deal “has the potential to cross partisan boundaries among the electorate, if not the political class.”

Policy expert Murphy said that in general, California offers a good model for how to achieve the Green New Deal’s goals. He said that the state has significantly reduced emissions over the past decades, while at the same time prioritizing workers’ rights and making sure communities impacted by environmental regulation have a voice. Murphy emphasized that California shows how well-designed policy can boost the economy and reduce emissions at the same time.

However, there was not consensus in the room that policies involving economic growth are the best way to move forward. The Q&A began with a discussion of the need for action beyond personal consumer choices such as driving an electric car or avoiding using plastic straws. But attendee and professor of English Joshua Clover quickly stepped in to argue against setting up a binary between policy and personal choice. “Policy is the way we’re not going to survive,” Clover said. He furthermore cited the fact that renewable energy technologies such as solar panels and wind turbines depend on material extraction that decimates landscapes and has led to human rights violations.

While Murphy conceded that “there is no way to make energy that has no environmental impact,” he countered that policy could still play a role in mitigating the impact of climate change on human and nonhuman life. Ziser said that although he shares Clover’s position that policy will not completely redress the massive harm already done, “I don’t believe we are in an apocalyptic situation where all action is meaningless. Even inadequate actions have moral value.”

Many present, including Pinto, agreed that organized collective action is the only hope we have. “I surprise myself by how optimistic I feel sometimes,” Pinto said. “There is no easy way. But the hard way is a lot of fun, because there’s a joy in getting together with other people.” Pinto stressed the need for people who disagree to talk to each other and find a way forward together. “There’s no way to walk away from the fight. We live here. It’s all we’ve got.”

Ziser announced a symposium on the Green New Deal to be held in mid-May 2020. Watch the DHI’s events calendar for more information.