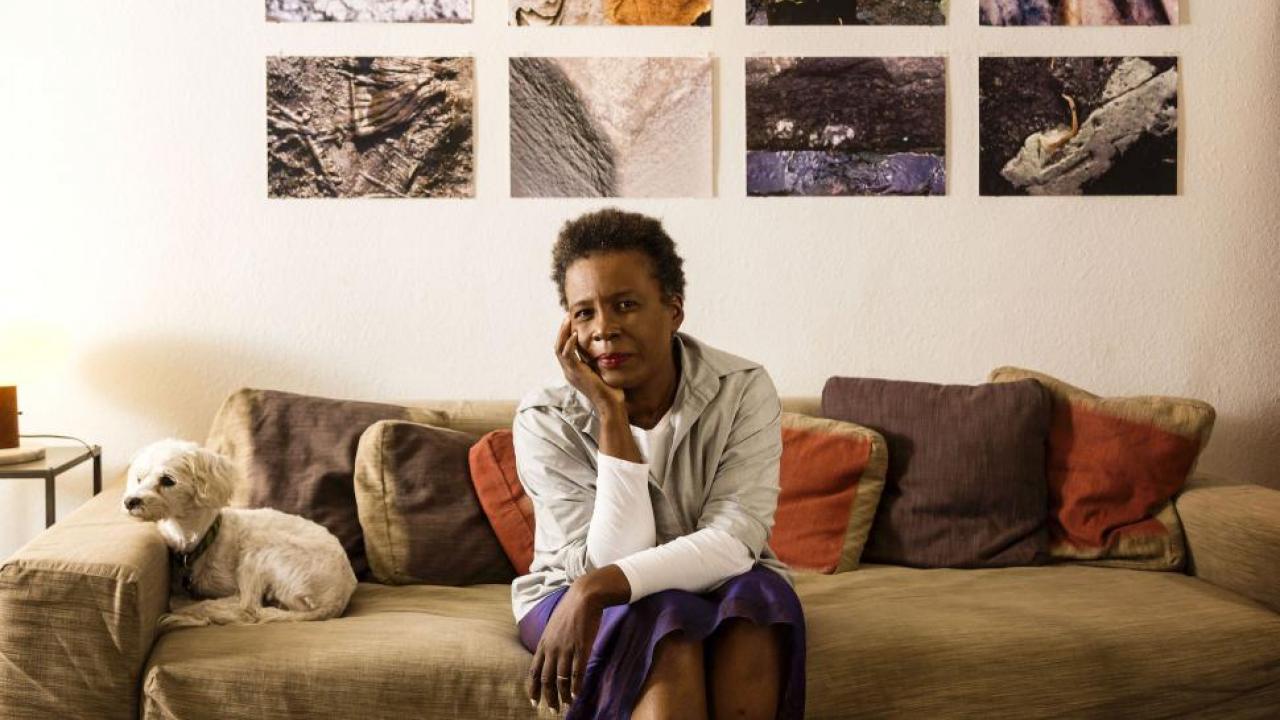 On November 4, 2020, poet, essayist, playwright, and editor Claudia Rankine delivered a virtual reading and lecture at the Jan Shrem and Maria Manetti Shrem Museum of Art at UC Davis based on her new book, Just Us: An American Conversation. The event, in the words of Shrem Founding Director Rachel Teagle, “brought the conversation home to us.”

Chancellor Gary May introduced Rankine and her ability to make space for conversations that may be “painful, awkward, or difficult, but necessary.” “It’s up to each of us,” Chancellor May emphasized, “to seize that opportunity in a way that brings us closer to our reality and our own humanity.” One of the event’s organizers, Professor Allison Coudert, said that “Claudia forces us to recognize these aggressions for what they are. If we are honest, we simply can’t avert our gaze.”

In a UC Davis News article, Jeffrey Day discussed how Rankine’s most recent book, like previous works of Rankine’s, including Don’t Let Me Be Lonely: An American Lyric and Citizen: An American Lyric, includes “poetry, essays, photographs, art, scholarship, analysis, invective and argument.” In her informal talk on the making of Just Us Rankine nodded to both the interdisciplinary turn in the humanities and groundbreaking, genre-bending Black feminist work such as M. NourbeSe Philip’s Zong! and Tiffany Lethabo King’s The Black Shoals: Offshore Formations of Black and Native Studies. Rankine’s talk exemplified her unique multimedia style for which she is known in contemporary poetry.

Language play, Rankine explained, is a crucial element of Just Us. Rankine plays on the homonym of “just us” with “justice,” where “just us” speaks to Black people. Depending on your positionality, she noted, “justice could only be for white people or denied to Black people.” The slippage that the homonym creates speaks to political conditions where people are repeatedly slipped into marginalization and disenfranchisement. Rankine uses wordplay to “attempt to build a thing between us” in the intimacy of conversation.

Still and moving images, in Rankine’s classic style, figured largely in the talk. Discussing Nona Faustine’s cover image of the reflecting pool on the Washington Mall cut by a large swath of black, Rankine explained that Faustine decided to keep the flawed image as a gift that could be read as a trace of racism, adding “I wanted... the idea of us reflected back to each other.”

The book, Rankine explained, “began because I started teaching a class called Constructions of Whiteness.” Students in the course were interested in a framework for investigating “how the centralizing of whiteness has happened.” The course looked at the historical trajectory of whiteness in the United States as well as ways in which whiteness gets replicated “almost silently” and “taken for granted as ordinary.” The course, she explained, was free to “move outside the parameters” of reading strictly in social science fields. Each class meeting began with a comedy set addressing whiteness. The film industry, for example, promoted an ideal “normal” skin tone that was white with its Shirley cards made to ensure color film was processed correctly. It wasn’t until companies selling wood and chocolate began insisting on the accurate representation of their products that norms in the industry changed.

In her Situations videos with her husband John Lucas, one of which she excerpted for the talk, Rankine examines this violence of whiteness via “the normalcy of… having not been meant to survive.” In the video, Rankine delivers the audio in soft, calm speech in contrast to the angry yelling of Amy Cooper—the white woman who called the police on Black bird-watcher Christian Cooper in Central Park, falsely claiming he tried to assault her—even as she names white people whose lies and weaponizing of language have led to Black and Latinx deaths. This both historicizes Amy Cooper’s violence and acknowledges the vulnerability of Rankine’s racialized position, embodying Rankine’s argument about whiteness as a limitation on sovereignty.

Rankine’s talk synthesized both her own works and those of others that challenge whiteness as default. For instance, Rankine paid tribute to bell hooks’ idea of the margin as a space of radical openness in her interviews of white men in liminal spaces. This “led to the erasures that are inside Just Us” that Rankine constructed collaboratively with her interlocutors to create moments that weren’t necessarily happening in other spaces. Two works of Saidiya Hartman’s, whom Rankine observed “basically coined the term ‘afterlife of slavery,’” Wayward Lives, Beautiful Experiments: Intimate Histories of Social Upheaval and Lose Your Mother: A Journey Along the Atlantic Slave Route, also figured largely in Rankine’s development of Just Us, as did the work of Fred Moten.

An Ideal, an Experiment, a Site of Struggle