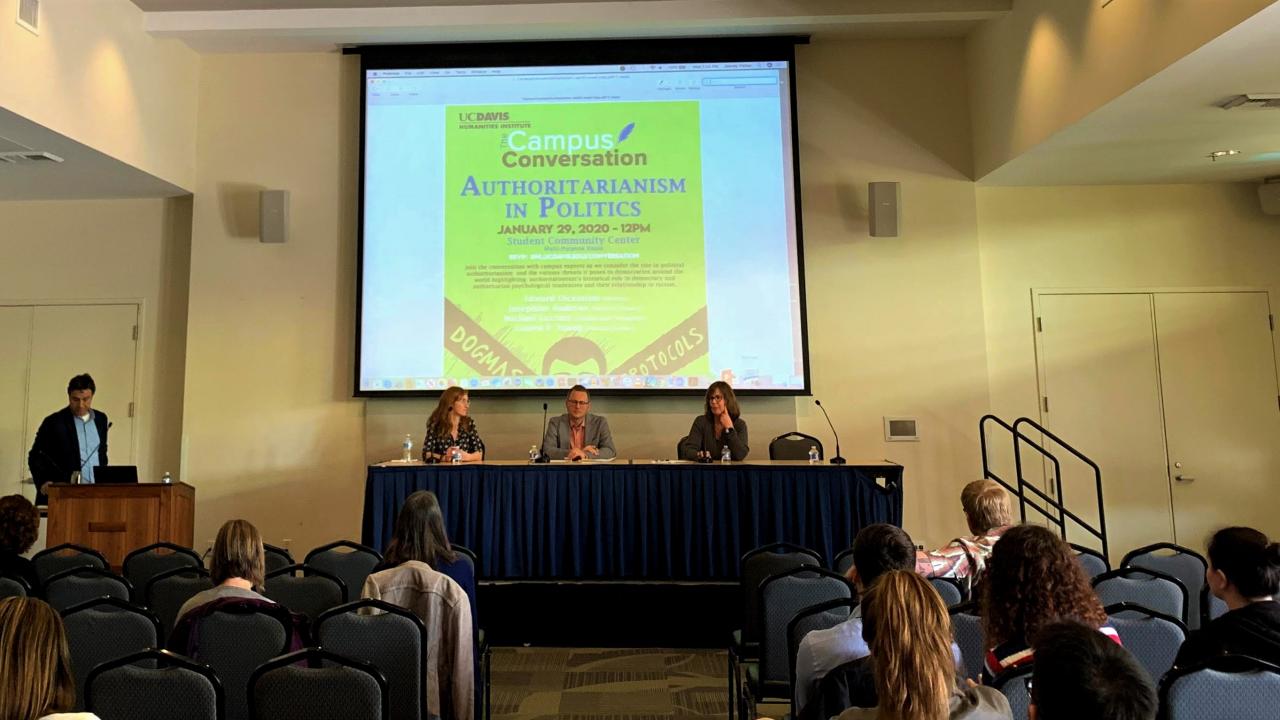 Consider a government in which elections are held regularly and on schedule but are unfair. The party in power manipulates public opinion through media control and harasses the opposition, so opposing parties present no real threat. Leadership responds to public opinion, but the public has no actual impact on policy decisions. The constitution allows leadership to claim that the government is democratic and thus legitimizes their claim to power.

According to Josephine Andrews, Professor of Political Science at UC Davis, this kind of government, which combines democratic and autocratic elements, is called a “hybrid regime.” Andrews cited a 2015 New York Times op-ed that dovetails with her research, in which the authors identify “a new brand of authoritarian government [...] that is better adapted to an era of global media, economic interdependence and information technology.” Russia, says Andrews, is a “quintessential example” of such a regime.

Andrews was one of four faculty speakers at last week’s DHI Campus Conversation event, “Authoritarianism in Politics.” The event provided a comparative look at authoritarianism across time and around the world. The topic had particular relevance during a week when the U.S. Senate was debating whether to remove the president from office on charges of attempting to interfere with election results.

Edward Dickinson, Professor in the Department of History, shared the historical contexts for twentieth century authoritarian governments. He showed that such governments have historically depended upon leadership cults, using propaganda and “extreme symbolic language” to depict their leaders as godlike, exceptional, and therefore unquestionable. Mussolini’s regime, for example, promoted itself with the slogan “Il Duce ha sempre ragione” (the Leader is always right), while Italian newspapers capitalized personal pronouns when referring to him. Workers who entered Mussolini’s office were required to sprint to and from his desk, in deference to his supreme authority and the importance of his time.

Moving forward in time, Michael Lazzara, Professor of Latin American Literature and Cultural Studies and Associate Vice Provost of Academic Programs in Global Affairs, provided an analysis of the relationship between authoritarianism and democracy in Chile. Lazzara situated the current anti-government protests happening there within the country’s dictatorial history, beginning with Pinochet’s assumption of power in 1973 after a US-backed coup.

Expanding on the connections between Pinochet’s dictatorship and the United States, Lazzara explained how the “Chicago Boys,” a group of Chilean economists trained at the University of Chicago in the 1970s and 80s, introduced free-market principles that influenced the economic policies of Chile’s military government and resulted in long-lasting wealth disparities. Despite the reforms introduced by later governments, Lazzara said, authoritarianism remains deeply entrenched and “encoded in the DNA” of the country’s current government. Lazzara argued that this legacy is inextricable from the Chilean government’s response to current protesters, which has included maimings and heavy punishments.

Finally, Lauren E. Young, Assistant Professor in the Department of Political Science, used the case of Zimbabwe to argue that intensive grassroots organizing can be effective in encouraging people to oppose authoritarian governments. “Most people around the world support democracy,” Young said. And yet, paradoxically, “Large proportions of citizens in authoritarian countries like their government, and even more don’t dislike it.”

Young’s research focuses on the significant population of Zimbabweans who say they have no opinion or refuse to answer questions about their political stance, often because they are aware that getting involved in politics would present a threat to their livelihoods. What does it take, Young asks, to get this population involved? Short of “morally outrageous acts of violence,” she concludes, it’s the painstaking grassroots work of “laying down social ties” that convinces people to speak out against authoritarianism.

In the discussion that closed the event, the scholars emphasized that autocratic regimes can arise in diverse geopolitical circumstances. During a week in which the president’s lawyer was in the news for arguing that a president could not be impeached if he believes his actions “will help him get elected in the public interest,” the Campus Conversation presented a sobering look at authoritarianism’s many forms.